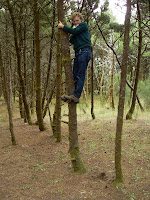 This airborne bridegroom without shape or sequence enters the world through your pocket, bearing all the time for time and its opposite, knowing a lot, feeling everything on. As yet unsung, not ready, uneasy, hungover probably, it is a trick of the lie or rather the light, laying it on real, awkwardly not exactly part of the weather we’re lying on. Its engine shyly breathes.
Posted by Sam Lohmann at 9:56 AM No comments: 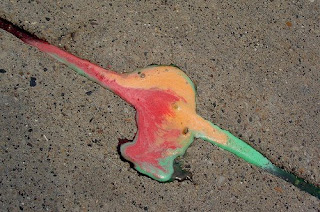 A beautiful half-melted ice-cream sandwich smeared like thick wet paint on the sidewalk, and swarmed by tiny ants. A professional may read it with easy delectation, as if sipping champagne with cake crumbs in it. The sidewalk was long and straight and full of diffuse moisture, and scattered with diffuse citizens who would pass him lightly on either side. Little bits of shredded paper scattered along Salmon street for about five blocks. And the road was strewn with horse chestnuts, bits of shredded documents, peplos threads, the painterly touch. “Isolated plinths, conduits, panels of rose-red aggregates . . .” A new kind of white tar like melted ice cream in the sidewalk cracks.
Posted by Sam Lohmann at 12:14 PM 1 comment: 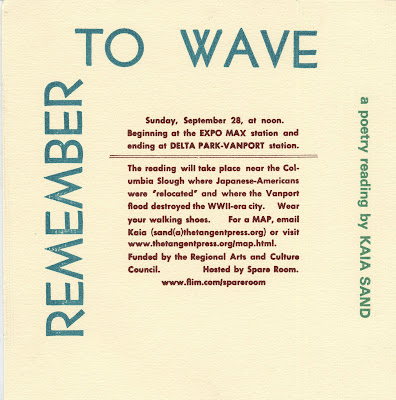 a poetry reading by KAIA SAND
Sunday, September 28, at noon.
Beginning at the EXPO MAX station and
ending at the DELTA PARK-VANPORT station.
The reading will take place near the Columbia Slough where Japanese-Americans were "relocated," and where the Vanport flood destroyed the WWII-era city. Wear Your walking shoes. For a map, email Kaia (sand AT thetangentpress DOT org) or visit www.thetangentpress.org/map.html.
Funded by the Regional Arts and Culture Council.
Hosted by Spare Room.
Posted by Sam Lohmann at 1:33 PM No comments: 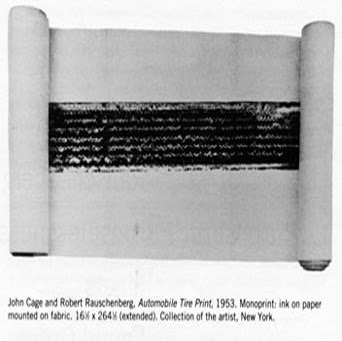 As a black tire runs along, leave the technician’s page a blank braced against the skimpy wind. Get all daggery on me I wouldn’t mind. Get haunted. Lubricate bike chain. And write a foul poem. You walk one more block with me, then you’ll be ready. Ha ha, bike stolen, lock removed, toeclips and reflectors removed, brakes loosened (?), bike left by the road in front of big house!
Posted by Sam Lohmann at 4:02 PM No comments:

I'm going to do a short poetry reading as part of this event next Sunday, September 21, at the Reed College Student Union, around 7:00. It's an art opening and book release party for Matthew Stadler and Stephanie Snyder's project "Suddenly: where we live now." I don't really know what else is happening, but it should be entertaining. The announcement is below. I'd love to see you there!

7-10 p.m. Psychedelic Sprawl
unfolds in the Reed College Student Union!
Gallery open prior to the event
Presentations and performances by 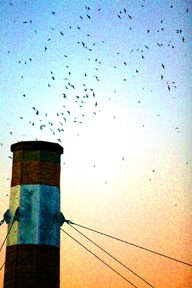 But M and I’ve been invited to picnic with the Vaux’s swifts. Last night I walked to Garfield with mom and dad to see Jupiter, Venus, and the crescent moon lined up, but they were all down by the time I was out tonight. It was after the cartoons and before the museum that I kind of lost it in a Mexican restaurant. A moment’s turnstile clicks—“penetrate / Through all its azures to a final”—and you’re gone. The next night there were asteroids. It’s like a fun, freaky, but not comic cosmos where thought bends and tears like a nebula, succumbing to freeway hamburgers. And in the rush hour of the technician and his mysterious partner—other and hyphen and half of anything he goes—their clasped hands lie on the white page on the clipboard.
Posted by Sam Lohmann at 9:37 AM No comments: 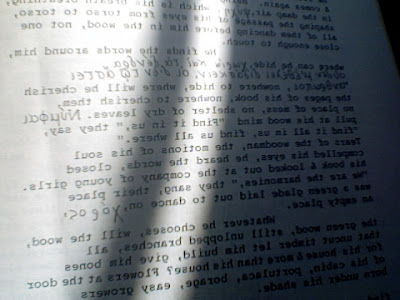 Joseph Bradshaw, This Ocean, or Oppen Series
Dude this book is crazy! A work of apocryphal poetry and fake interviews and textual commentary, in the mode of After Lorca, Pale Fire and Araki Yasusada, but way more mixed up. There are fake poems by George Oppen (complete with variant readings), short essays on fake poems by George Oppen, a fake interview between George Oppen and Joseph Merrick (the “Elephant Man”) interrupted by an invisible Jack Spicer, a fake poem by Merrick, references to “the fragments of the Ancient Greek poet George Oppen,” real quotations from Oppen and Spicer (both attributed and not), numerous references to Gus van Sant’s movies, a transcription of Spicer’s first poem from “Thing Language” italicized and broken into disyllabic “feet,” and some other poems presumably attributable to the Ancient West Coast Cro-Magnon poet Joseph Bradshaw. The whole thing is very tightly knit together and often cheekily funny, but stays incomprehensible and unpredictable and spookily arbitrary too. Oppen and Spicer very different poets, both revered for extraordinary integrity and intensity, tied up in both their cases with a caustic skepticism and a capacity for silence and waiting. They sometimes feel like mythic, inhuman figures (though Spicer was also a master of parody and self-parody). This Ocean confuses the two of them in an unsettling way and excitingly walks a line between deadpan parody/appropriation and obsessive admiration. See also Chris Piuma’s review at The Agora.

Chris Piuma, The Old City
Folded loosely pamphlet, edition of 20! From back in 2001. My favorite is “On the Celebration of Men”:

I come to bury Caesar, not to stall his swagger, aggrandize support on ivory pedestal, or enervate him rugged yellow-lipped hooked up and fed through sub-woofer bellowing: “There I go”, a study, tense, Boccioni in this focused still frame, but if we study over a moment we’ll miss, disparu, gone west, manifesto in hand, seedy, he scattered hours ago, so not to squeeze out any of, a harmful solution even on theoretical terms, cream of wheat, leg of lamb, eye of newt, your basic acid . . .

This sentence goes on for another page or so, with some questions along the way (“does he mind?, is he straw?, of bendy will?”).

Joseph Massey, Out of Light
These poems are tiny perfectly-articulated perpetual-motion machines, kind of Niedecker-meets-Armantrouty-sounding Every syllable is subtly crosstied to other syllables. Nothing wobbles. My favorite poem is the longest and messiest one, “Shay Park.” But I also like this “Path”:

Weeds
whacked to pulp
between slits
in cinder
blocks laid
in gravel.
A path
to these
porch steps,
their chipped
blue paint
—the rain-
stained wood
cracked through.

Posted by Sam Lohmann at 4:00 PM No comments:

"Everything you believe about space is so Latinate."
—Bill Berkson, "Idealism and Conceit"
Posted by Sam Lohmann at 5:25 PM 3 comments: 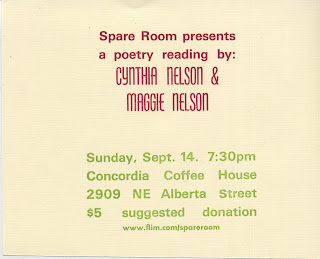 The tennis ball dropped from the boy’s hand, bounced twice, and rolled away. The way that gets in the way. I for one take semantics way to seriously. Only the moon gets to work backwards and unlearn the scholar’s bitten nail. “I am only pronouns, and I am all of them.” No matter where the hammer lands I go, and bump into things (a pile of cardboard boxes under negative roses) all the time, like a phantom that needs glasses.
Posted by Sam Lohmann at 9:15 AM No comments: