"Song of the Collator's Sword in the Spring Bureau

Elder, inside your casket
is three feet of water.
This sword once plunged
into Wu Lake and beheaded a dragon
A slash of brightest moonlight
shaves the cold dew.
A white-breasted seabird
tempered into a white pheasant's tail.
Truly this is a sliver
of Ching-Ko's heart!
Do not let it shine on
the characters in the Spring Bureau.
Twisted strands of coiling gold
hang from the hilt.
The sword's brilliant shine
can sunder an Indigo Field jade.
Draw, and the White King
of the west will quake--
wailing and wailing, his demon
mother in the autumn wilds."

"Flying Light
Flying light, flying light--
I urge you to drink a cup of wine.
I do not know the height of blue heaven
or the extent of yellow earth.
I only sense the moon's cold,
sun's burn, sear us.
Eat bear, and you'll grow fat;
eat frog, and you'll waste away.
Where is the Spirit Lady?
And where the Great Unity?
East of the sky is the Jo tree:
underneath, a dragon, torch in mouth.
I will cut off the dragon's feet
and chew the dragon's flesh:
then morning will never return
and evening cannot bend.
Old men will not die
nor young men weep.
Why then swallow yellow gold
or gulp white jad?
Who is Jen Hung-tzu
riding a white ass through the clouds?
Liu Ch'e, in Mao-ling tomb, is just a heap of bones.
And Ying Cheng rots in his catalpa coffin,
wasting all that abalone."
--Li Ho (790-816)
translated by Arthur Sze in The Silk Dragon
Posted by Sam Lohmann at 7:11 PM No comments: 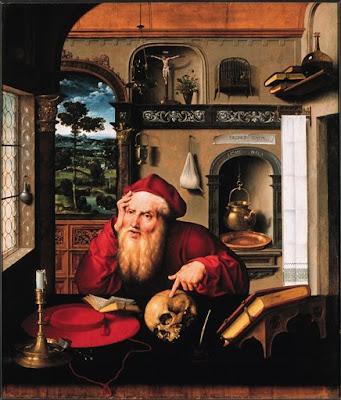 "He wants to wonder not look so
he points to the skull which has rolled
lost its socket, jaw gone and there's a brass
spout-neck pot hung from a chain in an alcove
where drink should come but it's tipped too forward
a bit in a hover, a gold offering plate just below
what's that white stripe just next prayer shawl
straight out with black snooze edge wipe
roll too long let out modern paint straight edge wipe
or adhesive tape ripped free leaves a swath of light?
Bordering that is a door edge its various darks,
such rules, such flint absence of palaver
the leather tomes piled out to float over
a possible foolish doorway drop, stand aside,
and the retort bulb of ink hugged further back
shelf lip to corner samovar could never warm up to cover.
It's not a coven it's a cell and all the adding up
of storages there forces there to be a knowledge there
if one could longly hold one's head the right in air
in crimson tapped or portal mapped the blue range
with lusted tree in winds of the antabuse sea.
It's an oil in the oil of coming to be, the
coiled off wisdom in a strapped book delicate
of its own ledge angled and blackness stored
which also stores the pen the discus hat the
skull its position in hoardy rhymes of the word
the turn to the why is it always righthand
casement of the sun on a town of porters idling and
cows of the stalwart darkest jade-green bush, thread of onyx
the stork sack of salt things behind him in a drop
to the fire wall of keenest pipe soot, bridled
to a shell, no haze, in fact a thought so clear
the jesus is crossed out tiny from shade of its tendril niche
and the bird invisible in its radio cage next space
nothing soars for the moment nothing is strained
to the thought pounced to brightest bolt of jet
the murmurs flee here the finger to the bone
of the word no nearer known is the point to a
task so barely opened the lips lock in purse
no further adept, no one's liquor in the world
tracing of the looks back to angle's end
in point blank he shows
in step left
the ceiling lengths burn"

--Clark Coolidge,
first section of "Jerome in His Study,"
in Solution Passage: Poems 1978-1981
(It took me quite a bit of looking around on the internet to find this painting, by Joos van Cleve, which the poem is "after." It's in the Fogg Art Museum at Harvard; their website dates it 1524-30, while Coolidge has "after Joos van Cleve the Elder, 1521." The poem becomes much more "transparent" when read next to the painting. It's an odd sort of ekphrastic writing, that somehow stays close to image detail by detail while letting in a lot of extraneous noise and thought--almost like a score for the eyes to "perform" the painting by: "tracing of the looks." I love the comparison, in passing, of the hanging shawl to a roll of toilet paper and then to the bright strip that remains when you remove a length of painted-over masking tape. And the moment of wondering why the windows are so often on the righthand sides in Renaissance interiors. And the way metaphoric description clutters up or clusters around each thing in the picture: "the stork sack of salt thongs," or "lusted tree in winds of the antabuse sea." I'm baffled by that last--antabuse, I learn from the internet, is a drug used since the 50s to treat alcoholism, and comes in small white pills.)
Posted by Sam Lohmann at 12:38 PM 4 comments: 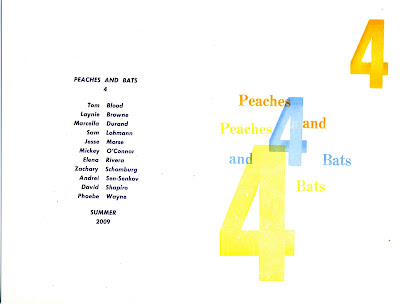 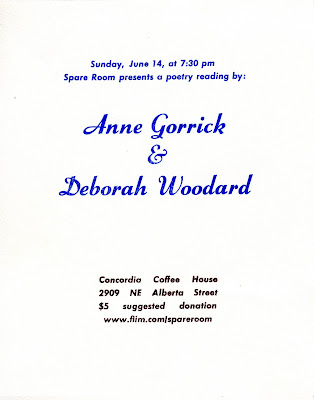 "a landscape, a wall, nothing, it refers to nothing but color, paint, the size and shape of the canvas, the way the paint is laid on, the thickness or thinness of the paint on the surface, the way it dried, shiny or dull, the quality of the reflection of light in the particular room where it was hung. that was all. except that it was pink. it was not empty of pink. it was full of pink. one might ask: why pink? this detail of pink. then there is language. hard to avoid the connotations of pink."
--Beverly Dahlen
A Reading (2)
Posted by Sam Lohmann at 8:11 PM No comments: