about "Object Poems" at 23 Sandy Gallery

I missed the opening and the reading for 23 Sandy Gallery's show "Object Poems," curated by David Abel, but I've been to see the show twice this week. If you live in Portland, you must go. The show is up until Saturday, November 26th (on which day the curator and some of the artists will be in attendance), and the Gallery is open Thursday-Saturday, 12-6 p.m.
It's been an amazing autumn in Portland for visual-literary-synaesthetic looking, asemic clerkdom, poetic objects and the quivering outward cilia of book arts, with Gallery Homeland's terrific "Reading.Writing." curated by Lisa Radon back in August, and now this. We might have a renaissance on our hands. Here are some things.
MaryAnn Hayden's three gorgeous broadsides are the only flat, printed, paper objects in the front room (unless you count Cuneiform Press's Bumpers, whose potential three-dimensionality is implicit), and I'm glad David broke his rule for them. My favorite is T, "inspired by a particularly gorgeous red and green and very silver and shiny long-haul truck." 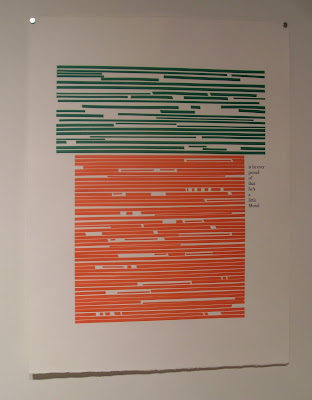 The text reads:
is he ever
proud
of
that
he's
a
little
mural
Mark Owens's Through, like many of his works, comes with instructions:
1) Collect small objects
2) Push them through the book
3) Think of this action as making a poem
4) Repeat 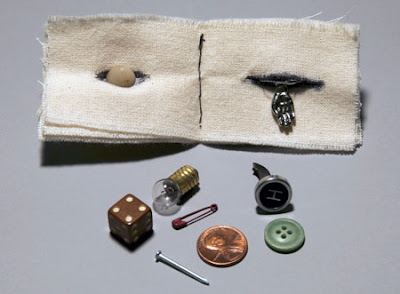 [photo by Kerry Davis]
And Owens and Maria José Gonzalez Arredondo's Which Way In: a dream migration game (for internal landscapes) instructs:
1) Roll the dice
2) Go to sleep
3) Dream in the places that land face up 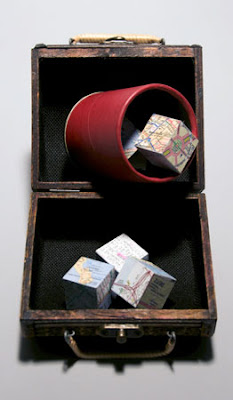 [photo by Kerry Davis]
Abel's own Molecular Text #2: Solids is the cleverest use of bubble-wrap and sharpie I've seen (and I've seen quite a few at the preschool where I work).
James Yeary has taken a lime green highlighter and highlighted every word in a paperback copy of Beckett's The Unnameable, but left the most spaces between sentences open.
Kristin Prevallet has made paper and lampshades from her old notebooks, which didn't solve her storage problem.
Leo and Anna Daedalus have presented ten rocks with their English translations. When I asked Leo whether he could translate one of my poems into rocks, he replied that it was possible with the right equipment, though he might have to resort to homolithy.
Geof Huth offers an array of reified pwoermds--my favorite is birchth. 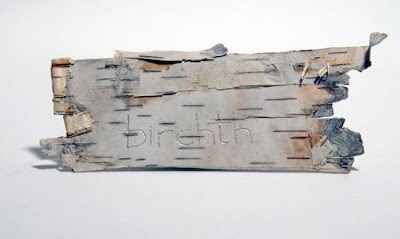 [photo by Kerry Davis]
A merciless little card instructs viewers not to touch Norma Cole's book Collective Memory, but the accompanying poster at least allows one to read--in the tiniest type--the text of the commonplace book which forms its understory. I remember, from Vaclav Havel, "I always sign in green ink, the color of hope," and, from Clark Coolidge, "The road to folly leads to one's own forms."
Entirely touchable, though, is Nico Vassilakis's Random Doses, which he encourages viewers to rearrange and then photograph using a disposable camera on a pedestal. When I returned to the show yesterday, the 6 letters were in the terrific arrangement below, which the gallery owner informed us had been made by a 14-year-old boy earlier that afternoon. 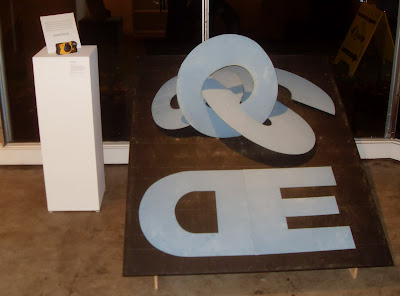 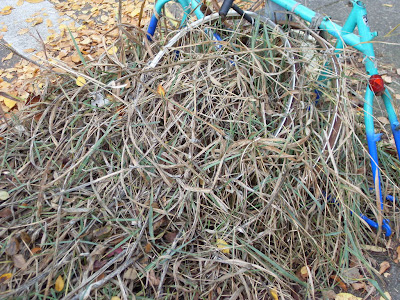