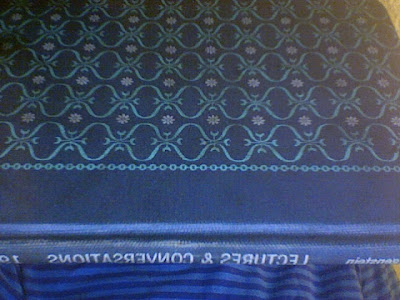 Ludwig Wittgenstein, Lectures and Conversations on Aesthetics, Psychology, and Religious Belief
Not LW’s lecture notes, but the notes of three of his Cambridge students. They sure knew how to take notes back then, and the terse, shorthand quality of the texts (with abundant ellipses, brackets around students’ objections, and footnotes where two scribes differed significantly). He’s very good on the intrinsic, unequivocal, experiential qualities of art, and the problem of description.

Very many people have the feeling: “I can make a gesture here but that’s all.” One example is that you say of a certain phrase of music that it draws a conclusion, “Though I can’t say for my life why it is a ‘therefore’!” You say in this case that it is indescribable. But this does not mean that you may not one day say that something is a description. You may one day find the word or you find a verse that fits it. “It is as though he said: ‘. . .’,” and you have a verse. And now perhaps you say: “And now I understand it.”
. . .
The mistake seems to me in the idea of description. I said before, with some people, me especially, the expression of an emotion in music, say, is a certain gesture. If I make a certain gesture . . . “It is quite obvious that you have certain kinesthetic feelings. It means to you certain kinesthetic feelings.” Which ones? How can you describe them? Except, perhaps, just by the gesture.

Suppose you said: “This phrase in music always makes me make one particular gesture.” A painter might draw this gesture. A man, instead of making a gesture, would draw a gesture. “Wittgenstein, you talk as if this phrase gave you sensations you couldn’t describe. All you get is sensations in your muscles.” This is utterly misleading. We look up muscles in a book on anatomy, we press certain parts and give these sensations names, ‘A,’ ‘B,’ ‘C,’ etc. All that would be needed for a piece of music would be the description ‘A,’ etc., giving the sensations in each muscle.

Jasper Bernes, Starsdown
This book is way more depressing than the new Heath Ledger movie. And often annoyingly clever, but always dead-on in its satire of the present Spectacle and its Society. His prosody, and his tendency to “load every rift with ore,” remind me of Hart Crane, or of a G. M. Hopkins in a world not “charged with the grandeur of God” (though he mentions “God’s blinking cursor”) but surcharged by the glamour of capital. I copied some lines into a notebook from “Desiderata”:

The horizon is a second skin, seeing
Sheathed by being, swallowed whole.
It kings us eye for I. It brings what
Flings us far near, an myopia, a fat
Cataract where the ocean pours over
The edge into threshing, blent serrations, scales.

And from “Alarum and Moral”:

Walking in Los Angeles is like dancing in wet cement.
The distances cheat. You make the city up.
Channels of light and dark symposium on squirm and offer
something glorious about to happen, a kind of art or tar
whose hardening a steady, moderate movement postpones.

Has it really gotten to the point where you can’t slice the monuments from
the moment without
taking off your fingerprints too?

Claude Lévi-Strauss, Tristes Tropiques
A real adventure story, with piranhas and capybaras and a seven-page description of a sunset. The first sentence: “I hate traveling and explorers.”
Posted by Sam Lohmann at 8:24 PM